A Theory of Human Motivation

The following are some excerpt from the book Second Chance: For Your Money, Your Life and Our World by Robert Kiyosaki. It shares one of the more important life ideas I have come across. I also recommend the book as it is a good summery of many of the rich dad books.

A Theory of Human Motivation
(Maslow’s Hierarchy of Needs)

In 1943, Abraham Maslow, an American psychologist born in 1908, presented his paper on “A Theory of Human Motivation” in Psychological Review.
Although Maslow did not present his concepts as a triangle, today his Hierarchy of Needs is often represented as one.
Maslow’s Hierarchy of Needs, pictured below, explains how economic emergencies affect our lives. 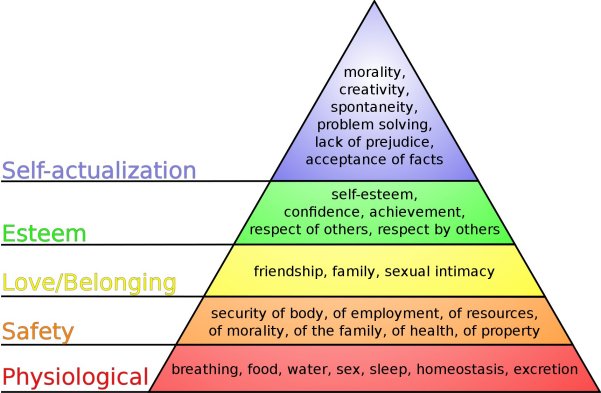 Maslow studied what he called exemplary people such as Albert Einstein, Jane Addams, Eleanor Roosevelt, and Frederick Douglass. According to Wikipedia, he explained his rationale for choosing his subjects by stating: “The study of crippled, stunted, immature, and unhealthy specimens can yield only a cripple psychology and a cripple philosophy.” It is important to note that the two base levels of the triangle, physiological (or survival) and safety, affect the three top levels of love/belonging, esteem, and self-actualization.

In 1973, I returned home to Hawaii from Vietnam to find my poor dad unemployed. He had resigned from his post as Superintendent of Education to run for Lt. Governor as a Republican against his boss, the Governor, a Democrat. After losing the election, the Governor blacklisted my dad from future employment in state government.
To survive, he withdrew his life savings, cashed in his retirement savings, and bought a national ice cream franchise. Within a year, his business failed and my dad was an unemployed and out-of-money PhD.
It was painful to watch Maslow’s Triangle collapse on my dad. When his first two levels of needs, physiological, (which means survival) and safety began to crumble, the rest of his hierarchy collapsed on top of him.
My mom passed away soon after he lost the election. Two years later my dad remarried, but was soon divorced. In his early 50s, as much as his children attempted to comfort him, he was alone with his grief, without much love or sense of belonging.
A proud and confident man most of his life, the loss of the election, his wife, his title, his power, and his job caused the collapse of his self-esteem preventing him from standing up, dusting himself off, and going back into the world.
Rather than become self-actualized, he sat at home, watching television, drinking, an angry and bitter man who was resentful of his friends who were more successful.
When you look at the top of Maslow’s triangle, you see the word morality.
I am thankful that my dad never lost his morality. He had many questionable offers from people who wanted to use his past reputation and success, but he refused. He chose to struggle financially rather than sell his morality.
Many people do sell their morality. When the base levels of survival and security are weakened, many people turn to crime, selling drugs or sex, stealing, lying, and cheating. When people are desperate, frivolous lawsuits increase and ambulance-chasing attorneys get rich.
In 1973, I saw the future. Not the future of my dad’s generation, but of my generation and that of our kids.
Rather than become productive and self-reliant, more and more people seem to believe they are entitled to government support. Their financial plan is to win the lottery, or hope for an accident so they can sue and live off the settlement.
When survival and security are weakened, a moral, ethical, and legal civilized society is the first casualty.
In my opinion, we are in an economic emergency. The questions are: Who will emerge from this economic emergency and who will not? Who will fortify their self-esteem, become self-actualized, and take a second chance at money and life?
Q:What did Maslow mean by self-actualization?
A:A self-actualized person is unstoppable. That is why he studied great people like Albert Einstein, Jane Addams, Eleanor Roosevelt, and Frederick Douglass. He did not study the mentally ill or neurotic people.
A self-actualized person will keep going no matter what obstacles are put in their way.
Q:So a self-actualized person does not need to be motivated?
A:Exactly. Today, when it comes to money, career, or finances, most people need to be motivated. They want incentives. They?ll ask, ?How much will you pay me if I work for you?? And ?What is my bonus?? ?When will I receive a pay raise?? and ?What are my benefits??
Many need “praise,” which means “If you stroke my self-esteem, I will work harder.” Many also say to themselves, “If you do not make me feel good I’ll quit or make your life miserable at work. I will gossip and spread rumors. And if you really upset me, I will take you to court and sue you for abuse or sexual harassment.”
Others seek ?punishment.? Many only get back to work when counseled or reprimanded. Many need ?performance reviews? to perform.
Q:Doesn’t this start at home?
A:I believe it does. I hear many parents say, ?I give my child $100 for every ?A? they receive on their report card.? Others say: ?I pay my child to read a book? or ?I pay my child to do chores around the house.? To me, this is training a child to work for money. This is why my rich dad refused to pay his son and me. He said, ?Paying a child to work is training a child to be an employee.?
Rich dad was training his son and me to be entrepreneurs, self-actuated boys who would grow up to build assets that produced income and created jobs. He was not willing to teach us to grow up to be adults who worked for money, job security, and benefits. He said, “If that is what you want to do when you grow up, then go to school, graduate, and work for people like me.”

Fame, Success, and Money vs. Greatness

Simply said, fame, success, and money can be achieved by motivation, inspiration, intimidation, and compensation. For most people, being famous, successful, and rich are enough. But these achievements are not the same as greatness.
According to Maslow, greatness can only be achieved by Self-actualization. When you are self-actualized, you become unstoppable—even if you do not have money, a good job, a great education, professional credentials, good health, or a roof over your head.
When considering your second chance, you may want to ask yourself: “What would cause me to be self-actuated?” If you are self-actuated, you have a better chance of emerging stronger from the coming emergencies.

The Top of the Pyramid

Always remember, at the top of Maslow’s pyramid is the word morality.
For many people, in their quest for fame, success, and money, the first casualty is their morality. This is why many ambitious and successful people fail to achieve greatness. For many people, the desire for fame, success, and money is so strong they are willing to do whatever it takes, including sacrificing their values and morals. We all know people like this. You may see them on TV, read about them in the paper, work with them… you may even go to the same church as they do.
In the real world, there are many great people who never achieve fame, success, or money. They are the billions of unsung heroes, people like my poor dad, who refused to sell their morality, no matter how tough their life became.
In your second chance, I hope you will choose to be one of these great people. Aspire to greatness, even if you do not achieve fame, success, and money. The world needs more great people, people who operate from “we win,” rather than “I win.” People who live by a strong moral code.

Ask yourself these questions…
Question:Who do you know who has fame… but is not a great person?
Answer:

Question:Who do you know that has success… but is not a great person?
Answer:

Question:Who do you know who is rich… but is not a great person?
Answer:

Question:Who do you know who is great… but may not be famous, successful, or rich?
Answer:

Question:Have you told this great person that they’re great and what they do that makes them great?
Answer:

Wouldn’t it be great if you got in touch with them and let them know why you think they are a great person? And be sure to tell them what specifically they do that you believe makes them great. To just say “You’re great” is nice, but lacks clarity and power.
If you personally acknowledge others for their greatness, the greatness in both of you increases. If one great person acknowledged 10 other great people, and those 10 great people each acknowledged 10 others, the power of Maslow’s self-actualized greatness would spread around the world.
If greatness, rather than despair, spreads around the world, we the people will have the power to solve the coming emergencies, rather than wait for our leaders to solve them.
Of course the “I win” people won’t like it, but it’s time for them to step aside and let the world win.

We are always happy to help.